Lakeland's Student Service Center is operating remotely until Monday, May 17 at 8 a.m. Please do not come to campus in person for financial aid, admissions, registration or the Lakeland Cares Cupboard this week. [ Contact us >> ]

A Brief History of Mooreland

Mooreland was the summer home of Edward William Moore, a prominent Cleveland capitalist who made his fortune in banking, electric railroads and telephone distribution in the late 1800s. Moore and his business partner, Henry Everett, developed the Cleveland Painesville and Eastern Interurban Railway. Moore and his wife, Louise Chamberlin Moore, had five children: Margaret, Franklyn, Kathryn, Edward Jr., and Elizabeth.

The original property included a working farm and covered over 1,000 acres. The country home, neo-classical in style, was substantially enlarged in 1906 with Milton Dyer engaged as architect (Dyer later designed Cleveland City Hall). Landscape architect A. Donald Gray designed the layout of a pool, fountains, rose garden, and a nine-hole golf course.

Mooreland was a retreat for wealthy industrialists. Records show that the noted guests included Polish Prime Minister and pianist Ignacy Paderewski. After Moore died in 1928, his family sold their home in Cleveland and made their permanent residence at Mooreland. The estate remained relatively intact until the early 1960s when sections of the original estate were sold.

In 1968, the Lakeland Community College Board of Trustees purchased approximately 400 acres (which included the mansion) from the Moore family as the site for the new community college. As part of the agreement, Edward Moore's daughter, Margaret, was allowed to continue to live in the 42-room home until her death in 1982, at which time the mansion became college property. 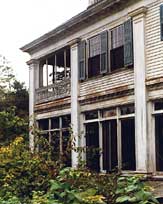 In 1988, the Lakeland Board of Trustees asked its newly appointed college president, Dr. Ralph R. Doty, to either find a way to renovate and use the dilapidated mansion or recommend its destruction. After an architectural study verified that the mansion was structurally sound, community members stepped forward and volunteered to take on the task of raising the resources for renovation.

In 1993, with assistance from The Cleveland Foundation, the Lakeland Board of Trustees commissioned a feasibility study to determine possible public and private uses for a renovated mansion. The study offered several options, but recommended that the college turn the mansion into a flexible, multi-use facility that would meet a variety of college and community needs.

After a great deal of consideration, the Board decided to accept this recommendation. The college administration appointed a project team of college and community members to recommend development a 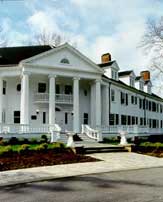 nd operational plans for Mooreland. Nearly $3 million in state capital money was used to fund the remaining cost of renovating and equipping the mansion as a state-of-the-art conference and community center, while maintaining its historic integrity. Ongoing operations are funded by revenues from businesses and community members using the facility, the college's general operating fund, and volunteer efforts.

The completed facility offers the relaxed atmosphere of an early twentieth century summer home with the comforts and technology available today. It is a retreat from the pressure of day-to-day business activities with the benefit of being in the backyard of Lakeland Community College.