Composed of approximately 25 middle and high school students, the Lakeland Jazz Impact is an honors youth jazz ensemble bringing together the finest young jazz musicians in Northeast Ohio, and is one of the only groups of its kind in the area. Led by Ed Michaels, it performs on campus, at the Lakeland Jazz Festival, and in recent years has appeared regularly at The Bop Stop at the Music Settlement in Ohio City.

Jazz students in grades 8-12 are encouraged to audition for the Lakeland Jazz Impact. 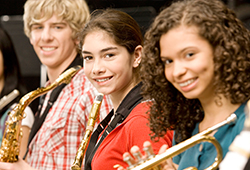 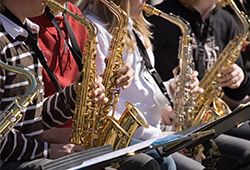 WHO IS ELIGIBLE: Current middle and high school students, grades 8-12.

WHEN: During the fall and spring semesters, the civic jazz orchestra holds rehearsals every Wednesday evening from 5:30-7:30 p.m.

WHERE: Rehearsals are typically in the Fletcher Music Room, C-Building, Room C-1078.

REQUIREMENTS: All performers must have sight-reading skills, have had prior ensemble performance experience, and be able to commit to Wednesday afternoon rehearsals and two to four performances during the academic year. Brass and woodwind musicians must own their own instruments. Students should be in good academic standing in their high school or middle school, and, when available, participate in their school's music program.

"Thinking back to my time with Jazz Impact, I am forever grateful to Ed Michaels for affording me such wonderful educational and performance opportunities as a young student.  So many fond memories…  What a friendly, fun, and encouraging atmosphere!  Those experiences contributed to a solid musical foundation and helped inspire me to pursue a career as a full-time performer.  Ed is a treasure, and Jazz Impact is a gem!"

"I have fond memories playing in Jazz Impact when I was growing up, and I greatly appreciate Mr. Michaels's long commitment to jazz education. It was fun playing in a group with other musicians my age who shared a love for this music, and Mr. Michaels always brought motivating energy and informative instruction to the group."

The Lakeland Jazz Impact had its beginnings in 1969 under the leadership of Bob Delly, the band director of J.R. Williams in Painesville, with the intention of giving high school musicians from the Lake County region an opportunity to play with talented musicians from other area schools. A crowning achievement of the band was performing with the legendary jazz artist Clark Terry at the inaugural Lakeland Jazz Festival.

In the fall of 1974, Delly handed the baton to Len Orcino, the band director at Lake Catholic High School. Under Orcino's direction, the band frequently appeared in concerts and area jazz festivals, including Cuyahoga Community College, Akron University and The Ohio State University. Two big achievements for the band were performing at the Notre Dame Jazz Festival and recording an album – "Impact Live '77."

Following their success at Notre Dame, Chuck Frank, the music professor at Lakeland Community College, invited the Lakeland Jazz Impact to join the community of performing groups at Lakeland. However, due to financial cutbacks, Jazz Impact became dormant for several years through the mid-80s.

In the spring of 1989, three area jazz musicians – Ernie Krivda, Lee Bush and Ed Michaels, were appointed to teach jazz improvisation classes through a grant from the Fine Arts Association. At the conclusion of the classes, Michaels was encouraged by Chuck Frank to write a proposal to Lakeland in an effort to re-establish the Lakeland Jazz Impact. The proposal was accepted, and Ed Michaels became the third director of the band.

Under Michael's direction, the Lakeland Jazz Impact continues on a strong path. The band plays several concerts at Lakeland each year and participates in the annual Lakeland Jazz Festival. A highlight of the year is the Lakeland Jazz Impact's annual concert at the Cleveland Bop Stop. The band has also played at the Tri-C Jazz Festival, recorded for the Lincoln Center Jazz Competition, and performed at various area high schools. The band's alumni include an impressive list of musicians who have established careers in music education and performance, along with music composition and arranging.